At Sibos 2022, the “Spotlight on Digital Value: Conquering the Metaverse” on Swift’s Innotribe Stage laid out the case for banks to carve out a space for themselves in nascent virtual worlds.

Michael Abbott, global head of Accenture Banking and responsible for its vision and strategy, set out to change the hearts and minds of public skeptics, making the case for siting in cyberspace through an alliterative five-pronged argument. points.

For example, some banks allow people to have conversations with their financial advisors in the metaverse. “In today’s digital age, where we’ve been remote for two years, it’s a unique concept, having a conversation again, maybe like we had in branches 50 years ago” , Abbott mused.

At the same time, the metaverse is a place that has its own spatial logic and coherence. “Banks are already figuring this out too. Many have joined JP Morgan and others around the world to set up their own branches in the metaverse.

But the problem is, you can branch out, but without the people you have “absolutely nothing,” says Abbott. Thus, the metaverse needs a population. Abbott says the best place to start in terms of populating the metaverse is internally. Bank of America is already using the metaverse, training its employees in the ins and outs of virtual reality (VR).

Hands in the air

“Training for a bank robbery in the metaverse is completely different from training on a flat screen. It’s a whole new level of immersion.

This is the basic difference between metaverse and web. In the metaverse, you own yourself and your own property. Abbott takes a moment to ask the audience if they know the identity of the individual on the presentation screen, an image of a man reclining in a large, opulent virtual property.

Only one person, your correspondent, knew the answer: hip hop entrepreneur Snoop Dogg. The musician bought a property in Sandbox, one of the main metaverses, for around $3 million last year.

Which conveniently turned into portability. Buying and owning something is only one side of the (crypto)coin. Why own something in the metaverse if you can’t sell it somewhere down the line? “You need to be able to take that property with you and that’s where it becomes critical for the banking industry,” says Abbott.

Abbott believes banks are best placed to be custodians. “We have all seen the crypto news about how millions, billions of dollars are being scammed. It doesn’t happen in the banking system because we figured out how to do the custodial process. So this is a huge opportunity for banks around the world.

“The key takeaway is that the metaverse is really a projection of our reality, what we’re doing today but putting in a virtual world,” says Abbott, starting with his five P’s. “But there’s still a reality check.”

The metaverse is still in its infancy. To demonstrate the evolution of technology, especially technology that is becoming ubiquitous and that we take for granted, Abbott releases an Apple Newton, a proto-smartphone and personal organizer that the tech giant launched in 1993. Needless to say that he was so far ahead of the curve that he flopped.

“If you were paying attention in 1993, you could have imagined the future.” The VR glasses and handheld controls currently needed to access virtual worlds will be replaced by benign specs and a hands-free experience. “We’re at the Apple Newton stage of the metaverse,” says Abbott.

The banks will take advantage of the opportunities, as they have done in the past. In 1997, Royal Bank of Scotland (RBS) was the first to launch a mobile banking app on a Blackberry phone, leading to mobile banking apps that 90% of people use today. “The same will happen,” Abbott urges.

The big question is how to make money. “Banks, in my opinion, are driven by two things, fear and greed, and the fear of missing out has never been greater on this one. But before we talk about how you’re going to win money, let’s take a step back and remember that you need a purpose.

The objective that will emphasize the presence of banks and financial institutions in the metaverse will be to make financial services more human. Accenture conducted a survey, asking tens of thousands of customers around the world if they would be interested in talking to their bank in VR. A whopping 56% said they would, “even if it doesn’t exist today.”

That’s about the best request you’ll get, says Abbott. With the purpose taken care of, the next concern is payouts. Every bank wants to know how it’s going to dominate, but “that’s the wrong question,” says Abbott.

To rephrase the question, it is not about making payments but about being able to accept payments. Again, the story teaches us a lesson, this time about cooperation and collaboration.

hands around the world

In the 1930s store cards were introduced. Naturally, they only worked in one store, like the Sears department store. The equivalent today, says Abbot, is Roblox money, which is essentially private label money that you can only use inside that particular metaverse. But what happened to the cards? Tired of carrying around a dozen store cards, consumers lobbied to merge different outlets into one card. 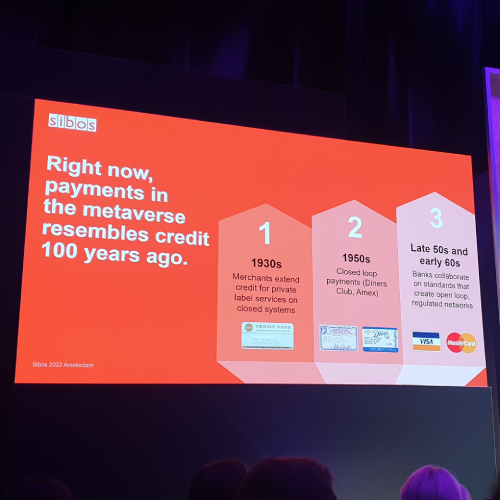 “These closed networks started to evolve, like American Express, which allowed you to use one card in multiple places.” The equivalent of that today is Bitcoin, Abbott thinks. “But eventually the banks got smart and realized that if they didn’t do something together they would lose that space.”

Coming together in the 1960s, they eventually formed the Visa and Mastercard networks. Today, Visa and Mastercard handle ten times the volume of any adjacent payment network. “The question becomes, how do you get from this second phase of closed networks to the third phase?”

Abbott says this will require collaboration, working together to create standards. “It’s not going to be a winner-take-all game,” Abbott said. To dispel any naïve optimism on his part, Abbott recalls that in 1973, 239 banks around the world in 15 different countries decided to unite and create the Swift interbank cooperative, which revolutionized global payments.

“They realized there was power in collaborating and developing these standards. And if we build those standards, together, it’s going to kick off a whole new level. It’s going to allow us to put humanity back in the bank. It will allow you to create mobile loyalty programs. And on top of that, it will represent perhaps one of the biggest marketing opportunities,” says Abbott.

Concluding his pitch, Abbott signs: “The metaverse is coming. Don’t be afraid to miss out, build the strategy, start thinking and stay curious.

A case for strategic planning

How technology is reshaping the future of money and banking