About eight months ago JPMorgan Chase (JPM 1.41%), the largest US bank, has launched a consumer digital bank in the UK. The aim was not only to establish a presence in the UK retail banking market, but also to pilot a digital banking model that could be extended to other countries as JPMorgan Chase expands there. ‘international. So far, although it is still early days, JPMorgan Chase appears to be making good progress in the UK. Let’s take a look.

The foray into the UK

Breaking into retail banking in new international markets is not easy, even for a bank as big as JPMorgan Chase. There are already well-established brands in new markets, and getting established usually requires significant investment, such as buying or building bank branches, offices, and data centers. JPMorgan has decided to essentially launch its own digital challenger in the UK as fintech is all the rage and physical banking is less favorable these days. Additionally, JPMorgan believed that a digital bank would be a less expensive path that could be more flexible to experiment with. So far, the bank appears to be off to a good start.

At its recent Investor Day, JPMorgan Chase revealed that it had 500,000 customers who had made about $10 billion in deposits and made about 20 million card and payment transactions in eight months. But perhaps most impressive is that JPMorgan claims to have collected twice as many non-interest-bearing deposits as digital challenger banks in the UK a year after its launch. Non-interest bearing deposits are those on which the bank does not have to pay interest and are considered more stable than other deposits in a rising rate environment, making them the best type of deposit that a bank may have.

In addition, the bank considers that around 30% of its customers are highly engaged with its products. Sanoke Viswanathan, head of international consumer banking at the bank, said customers used JPMorgan debit cards several times a day and made payment transactions in and out of their accounts several times a week, indicating a primary banking relationship. JPMorgan Chase plans to add more lending and investment products to its UK digital bank. 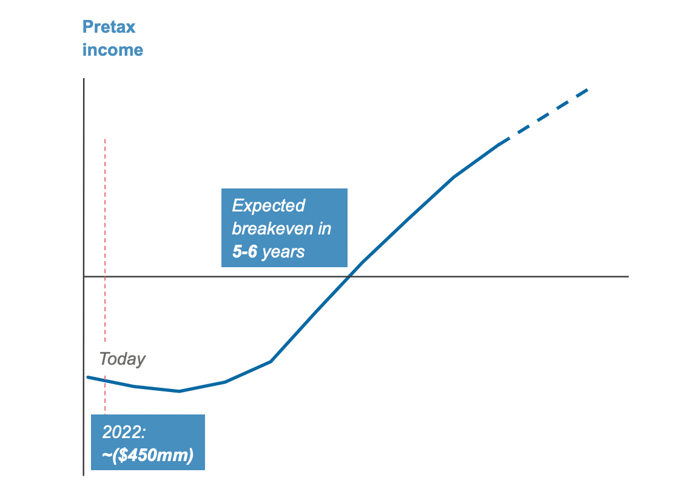 Although digital banking will not help results immediately, management expects the operation to break even within the next five to six years. The bank expects to incur an annual loss of around $450 million over the next few years as it ramps up.

But it appears the cloud-native platform on which JPMorgan has built the digital bank is quite efficient, with around 70% of its costs largely fixed. The platform can also support multiple products and scale to millions of customers at low marginal cost. Viswanathan said the bank could use the platform to enter new countries without too much additional investment.

JPMorgan already appears to be considering future international consumer expansion by buying UK digital wealth management platform Nutmeg, which the bank says will play a valuable role in the UK and beyond. JPMorgan Chase has also taken a 40% stake in Brazilian digital bank C6 Bank, which has more than 16 million customers in a huge addressable banking market.

As Viswanathan said, “it’s too early to claim victory”, but JPMorgan’s digital experience in the UK appears to be off to a good start considering trends with non-interest bearing deposits and highly engaged customers. The bank also appears to have invested in an excellent digital platform that can scale effectively. Of course, it will be a few more years before Britain’s digital bank contributes to the bottom line, and investors won’t be happy if the bank doesn’t meet its targets, but all you can do now is keep watching progress him closely and hope he stays on track.